Orchestra Director of the Year

Each year the TODA Board of Directors selects an orchestra director or teacher who has served his or her professional nobly and selflessly, leaving the mark of love, kindness and good musicianship on the students he or she has trained.  This is the highest honor TODA bestows and is highly regarded by all of our members. 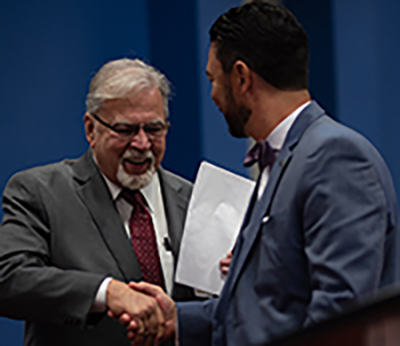 Charles Tittsworth graduated from Woodrow Wilson High School in Dallas and was a Texas All-State Orchestra member for two years. He graduated from North Texas State University in 1971, with an emphasis on strings and vocal music. He then earned a master’s degree from Southern Methodist University in 1973 in orchestral conducting. He was principal double bass in both university orchestras. In his third of year of teaching, Charles was selected to begin Klein I.S.D’s string program, then served as an Adjunct Professor at Houston Baptist University. From there he was selected to follow Dr. Jay Dunnahoo at Sam Rayburn High School in Pasadena I.S.D. where he served as orchestra director for 12 years. The Rayburn orchestras consistently earned Sweepstakes at U.I.L. competitions and were twice Runner-up for All-State Honor Orchestra. Charles was then selected, along with Mary Scott Taylor, to begin the string program for Humble I.S.D. After that he followed Penny Meitz at Lanier Middle School and Lamar High School in Houston I.S.D. for the final 15 years of his career. The Lanier Sinfonia was twice selected as All-State Honor Orchestra, and were twice Runner-up. Together, Lanier’s two orchestras earned 28 Sweepstakes at U.I.L. Contests. Charles was selected Lanier’s Teacher of the Year in 2004. He also served as choir director at four Houston area churches.

During 38 years in the classroom, “Mr. T.” (as his students called him) chaired two U.I.L. Prescribed Music List Committees, significantly increasing the number of selections on most lists, and thus making the performance rules more flexible. He was elected to the TODA Board and served as President in 1984 and was also elected Orchestra Vice President of the Texas Music Educators Association.

Charles has also been a successful double bass double teacher throughout his career, assisting dozens of students in qualifying for Region and All-State Orchestras. In retirement, Charles is principal double bass and assistant conductor of the ECHO Orchestra and continues private teaching as well as providing program notes for All-State Orchestras since 1982. He performs community service as well, organizing dinners for homeless LGBTQ youth through his church in the Montrose neighborhood.

Throughout his career, Charles has relied on TODA Conventions to bring energy and new ideas to the start of every school year. He values this robust association of professionals for generously sharing their ideas and friendship in ways that foster programs all over the state of Texas. According to Charles, just to be a part of this amazing profession and organization is reward enough. “I first entered this profession in 1973, and to be named Orchestra Director of the Year exceeds any of my modest expectations.  I am also giving thanks to my husband, Dr. Samuel West, for his loving support. I am deeply grateful to the TODA Board and its members for this honor and salute you for the excellent work you are doing to preserve fine arts in the lives of our students.” TODA proudly welcomes Charles to the ODY Family!